Wow. Where have we been the past several months?

We've taken an unexpected break from our Hollywood dreams and dabblings to tend to family matters. The passing of parents and the job of acting as an executor of an estate demands that you put your own life on hold.

This sad excursion has given us a chance to (momentarily) wipe the stars out of our eyes.

Now that we have some closure on the business side of that journey we're dipping our parched toe back into the waters. But maybe water isn't the best metaphor now that the rest of the world can see the damage from the ongoing drought in sunny California. 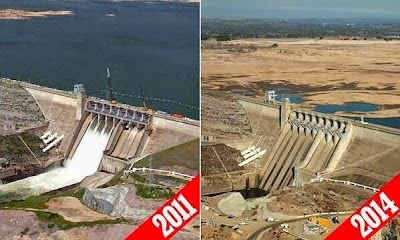 Look. It's a desert, folks. Water has been re-routed and piped in for decades so Hollywood can keep up the lush facade.

An actor friend of ours who lives and works in LA sometimes talks about the biz sucking his soul dry. But that's what you get when you live in a desert town.

The desert will win. It will eventually claim what it was meant to claim ... no matter how often you sweep the sand off your porch.

I have a prediction that there will be a mass exodus from CA to the Ohio River Valley area - where green things grown naturally from the abundance of fresh water lakes and rivers. Where earthquakes are minimal to non-existent and where the cost of living is 40% less.

I have a feeling that Hollywood will move its studios to this side of the Mississippi. If I'm wrong, the beautiful people of Hollywood will be trapped inside their bubble surrounded by the ever-encroaching desert while they sip wine under the smog ... I mean stars.

Meanwhile, we Cowtowners will continue to enjoy our film industry boom in Beautiful Ohio.

Thank you, technology (and fresh lake and river water).

In other news ...
Stay tuned for more Cowtown news as we dance on the periphery of the Hollywood bubble
(um ... at least until that well runs dry).

Posted by Scratches and Scribbles at 7:47 PM No comments: